This client needed a new slipcover for her couch that had worn through on the arms and cushions...she decided to do her chairs as well  out of the same fabric to unify the whole room. She chose a tan jaguard fabric that washed up beautifully.

The room had a floor to ceiling wall of windows, so I had a hard time with my pics because of the sun. 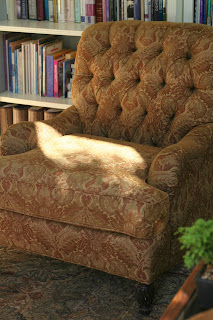 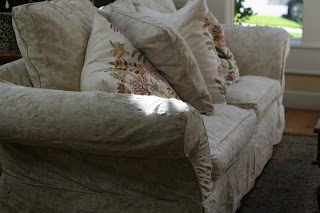 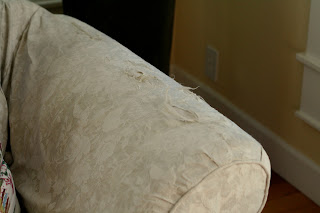 The arms had were done...time for something new. While I was fitting her couch Jen's 6 yr old son came home and brought his friends with him. When I came out from behind the couch I caught three of them unraveling my large roll of piping and trying to cut off a piece of "rope".  I helped them cut off a piece...too funny, my boys at home are always stealing my piping and using it for various projects. My boys have tied all the cardboard fabric tubes together to form a teepee. Then they drape every blanket/sheet that we own over the top of it for a fort. 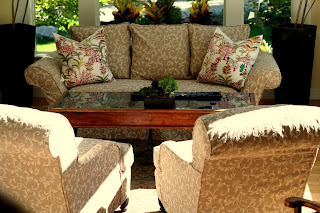 Here is the room finished with all new matching slipcovers on. Sorry about the sunlight. 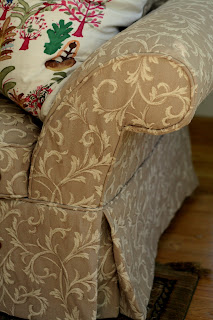 Front of the arm on the couch. 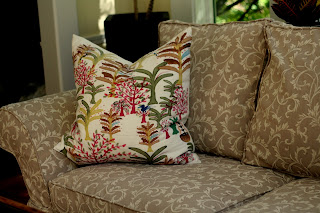 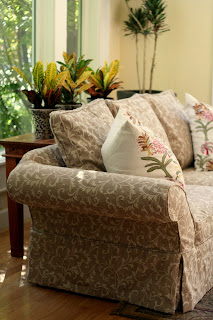 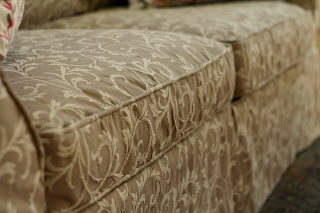 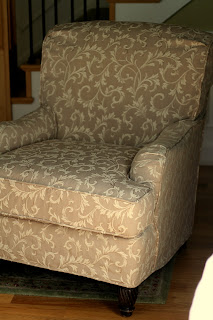 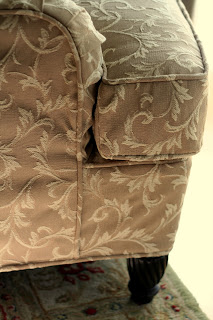 The chairs had english rolled arms, which are my favorite. She wanted to let the dark wood legs show, so I ended the slipcover with piping. 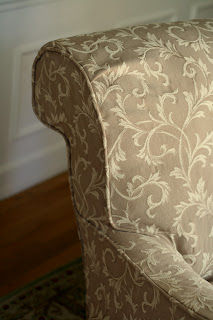 Chairs had the scroll back....so I piped up and around the scroll and down the inside arm. I also piped the outside edge of the arm. 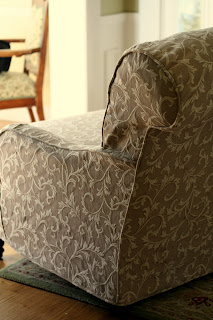 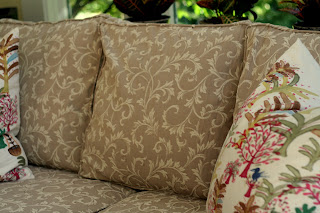 Another shot of couch.

This client was leaving out of town and said she'd leave the door open for me and she'd leave a check on the table. I got there and the door was locked, and I could see my check through the window on the entry table.


I live about an hour from her...I didn't want to make another trip, so I went around back and luckily the back door was open. I let myself in, unlocked the front door and somehow managed to carry that heavy chair all by myself into the house. I think it was bigger than me. I was only panting a little bit by the time I got it in place. hahahha. I could only imagine what someone would say if they watched that whole saga.

Side Note--- I am booked till January...email me if you want on my list for January.

Posted by Slipcovers by Shelley at 7:52 PM

Pay Day! haha. Great job on the set. I am STILL tackling my cushions...

Beautiful Shelley! You never cease to amaze me :)

Beautiful job! I know what you mean about the saga of the chair. Sometimes I wonder what my neighbors think when they see me lugging chairs outside to take pictures! Your work is fantastic...

The Rooster and The Hen said...

Shelley, we found your site after you logged into ours, thanks so much! We remembered your name from an article we read back in the spring in the Daily Herald and had to look you up- you were part of the motivation to start writing about something we love. It took us a few months to get started, but we finally launched our site in the fall. Thanks so much for the inspiration!

Your work is fabulous. My first upholstery project was my 6 dining room chairs. I removed the original fabric and made a pattern. Now, these seats had welting at the top and bottom edge. So after a few days of work and lots of swearing, they were done and looked very professional. I called and upholsterer the next time they needed recovering, and he wanted $25. a seat. It was more than worth it to have them done by him! But now I have quite a few upholstery items under my belt and feel quite confident.
Once again, you really do nice work.

Your slipcover work is wonderful, I'm working in my first try after watching Miss M's tutorial. Definitely not as easy as it looks but I think I will be happy with the finish and it won't be my last. Love looking at your blog, your slipcovers make the furniture look so comfy and inviting!