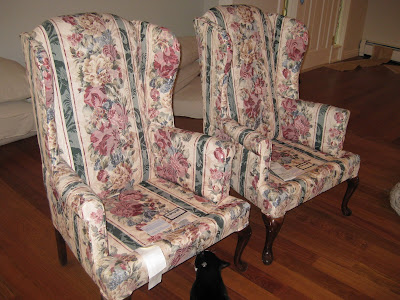 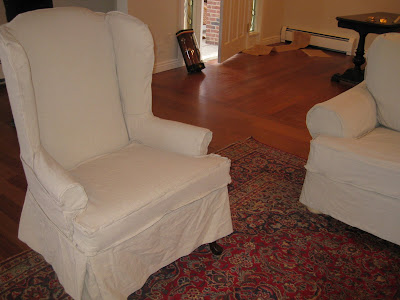 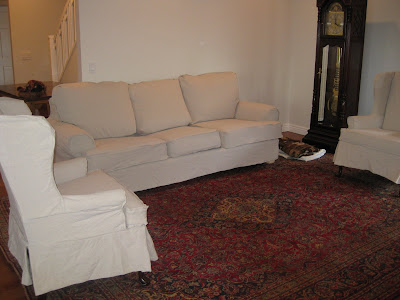 After...a shot of the whole room 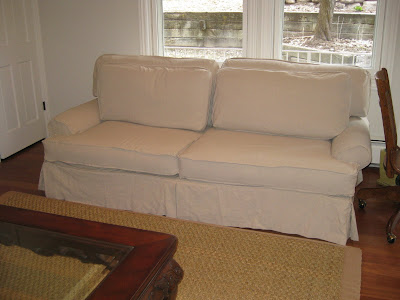 after of the couch in the other room 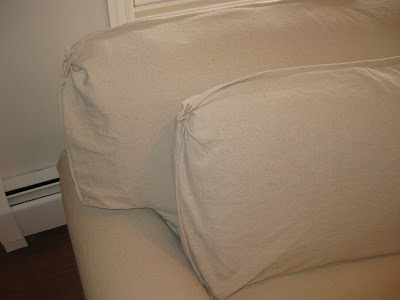 Close up to show the french welt.

So I have this designer client that was staging a house in Federal Heights for an open house to sell the home. He loves monochromatic and loves to use drop cloths. He always does french welt instead of piping (1/2" flat flange with kiss pleats in the corners). He bought a bunch of used furniture to fill up the empty spaces, as well as using what she had.
I had 10 days to complete the following.... 2 couches with back cushions, 2 wingback chairs, and a chair and a half with a back cushion. oh and two huge tablecloths. So I finished it in time and then the open house was pushed back a week. Gotta love it huh?
Of course I only took a before picture of the wingbacks. The other couch and chair were a yellow chenille with a very modern black/yellow diamond print on the cushions. So the change was very drastic. I loved the final look.


If you are thinking of using dropcloths...just know that they are flawed fabric and may not hold up as long as normal canvas/duck cloth/cotton will. They usually have runs of weaker spots running through them and you can only work around so many flawed areas. This designer loves it and thinks it adds to the character of the piece.

Posted by Slipcovers by Shelley at 5:26 PM

I can't believe I just randomly came across your blog! I was just telling my hubby today that I need to find someone who can make me a few slip covers for my UGLY chairs!!! I will be contacting you soon! Your work looks amazing!

These Slipcovers look great! And thanks for the info on the Drop cloths I just purchaced some for a slip covered chair that Im doing for a shop. Hope mine turns out as well as yours!!

Shelley,
I love these slipcovers with the drop cloth!

wow, great work! I hope my first attempt at slipcovering remotely resembles work of yours!

Oh how I could use your talents! I'm in the process of trying to figure out how to do my large chesterfield sofa in dropcloths. It's got a pillow back on it - so I thought it'd be easy, but that chesterfield roll on the arm and back is tricky!! I'm so happy to have come across your blog! Off to see more!