So I caved and bought a leather sectional for the basement... I have been talking myself out of it for the past two years. Finally, I did it! I love it! But I wanted to bring in some fabrics to add some color.

Last weekend I went on a girls night out..and we ended up at Target. I found this pillow with 9 yellow rosettes on in it. 100% me! I bought it and then got on http://www.fabric.com/ the next day to find some other fabrics to go with it for the ottoman and other pillows. 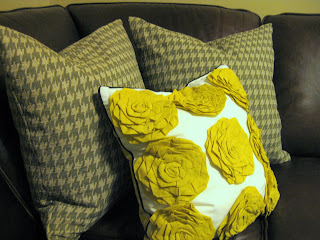 I chose a large gray houndstooth that had a texture like barkcloth. 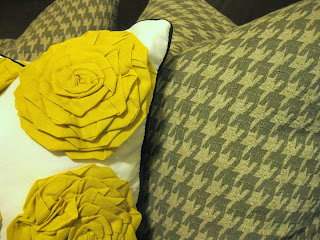 Close up of the pillows. 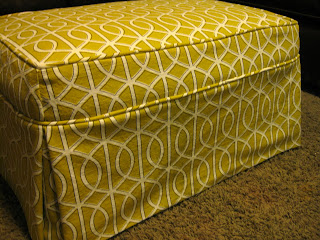 Ottoman...I found this yellow geometric print...I was debating between this one and another one by Ty Pennington. Heber liked this one better, so I went with it. Then I remembered my sister had a roman shade made for her kitchen window, and from memory I was sure it was the same fabric.  Then I was really excited, because I had seen this fabric in person and knew I would love it. 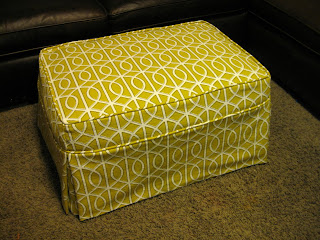 Slipcovered Ottoman...check out the matching! 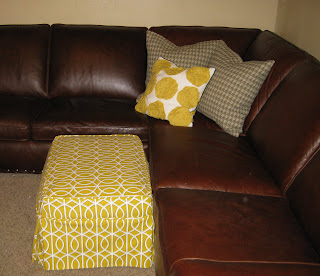 Pillows with the new leather sectional and ottoman.
Side Note--- boys had their first baseball game two weeks ago. The big boys are so excited to be on the same team this year! Logan played catcher and Carter played 2nd base. Luke's just excited about getting the treats after the games. 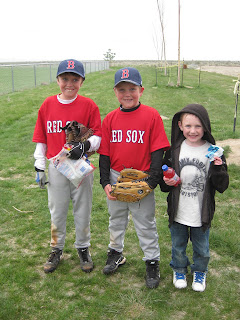 --- Just added on a team to run the Moab relay next weekend!
--- I am currently working on 3 couches, eight chairs, 4 ottomans, some cushions and pillows....I'll have lots of pictures once I finish everything.

Posted by Slipcovers by Shelley at 12:08 PM

where did you buy your sectional? I'm on the hunt for one. Looks great! I have the same pillow from Target, love it!

You blow me away. If I had that much waiting in the "waiting area" my garage, I would pass out. Beautiful work.