This client decided to change it up with some oatmeal linen that she prewashed to soften it up. She wanted to do french welting instead of piping. French welting is a 2" strip of fabric folded in half and ironed and sewn in the seams with tucks made in the corners.

She also wanted a boxpleat skirt all the way around the base with the legs showing as much as possible. 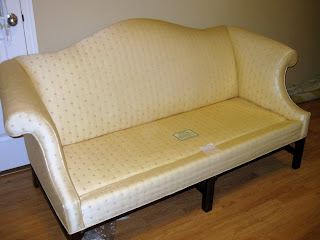 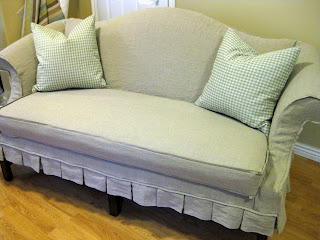 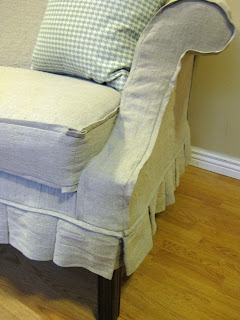 close up of front of arm...see the tucks on the french welting on the corner of the cushion? 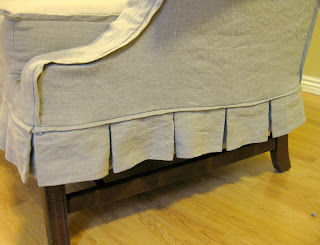 Boxpleat skirt.... I self lined this skirt (fold in half). 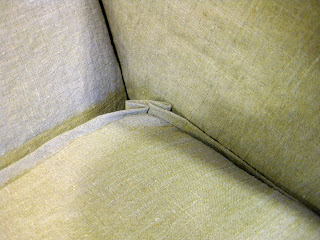 French welting tucks on the cushion. 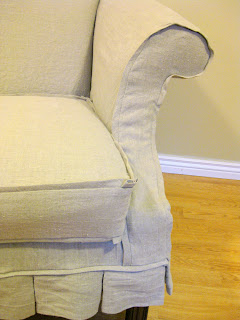 Close up of front.

Side note...so tonight I bribed my 6 yr old (or maybe he bribed me?) to let me cut his hair, it was nasty and bedhead in the back and shaggy. He loves baths... he takes like three a day, so he had asked me to take a bath with him (bathing suits required of course). I told him I would if he let me cut his hair.....HE SAID YES!!!!! Halleluiha (however you spell it)!!!! 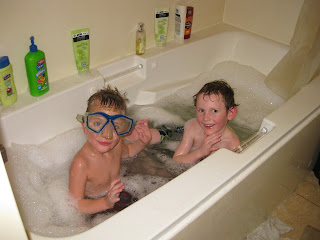 Here is a pic of him in the bath with cousin...this is how my kids are entertained in the winter...bathing suits and a bottle of shampoo.

Posted by Slipcovers by Shelley at 2:22 PM

Love! I really wish we lived nearby, so you could work your magic on my furniture... Great work!

You should move here! I LOVE your work.

This is just lovely!

Have a nice weekend!

WOW!!! Came out SO cute!!!
www.jaderbomb.com

Love the french welt! It's all in the details.
I wish you lived close so that you could work your magic on my furniture!
Susan : )

I posted about your turquoise chair on my TT&J fb page :)

That is beautiful (& those little ones are adorable!)

Great job. Love the details in this loveseat!

Shelley: I have to say this is my most favorite yet! I love the french welt. I bet that becomes more and more popular....Excellent work!

Shelley....I have to say this is my favorite slipcover to date. I LOVE the french welt, and I bet you will be getting many requests to do it! Excellent work, as always....