So I realized I haven't posted about my kids that much lately...so here are some pics from this winter. For those of you who don't know, I have 3 boys ages 10,8,and 6. I always post their funny things on facebook...so I decided to copy and paste some of my posts for you. We all like a good laugh right, so that way we know we aren't alone in this whole motherhood thing.


*Luke took a bath...like he always does (3 times per day). He got out was watching tv in the basement while I was in my work room and after awhile I realized I could still hear water running in the pipes in the wall. "Luke did you turn the bath off?" "No" "WHAT?" I run upstairs and find my 6 ft jetted tub full of water 1" from the top! with the water still on full blast. HOLY CRAP!

*Carter asks the same three questions every night at bedtime... "Did you check the weather?" (he wants to know if it's going to be warm enough to wear shorts in the morning to school...ha ha, I always tell him it's going to be months), "Did you lock all the doors and close the garage?" and "Are you going anywhere tomorrow". Then he needs his second kiss and hug good night.

*just heard from a neighbor that she saw Luke being carried into kindergarten by the principal kicking and screaming, saying he didn't want to go to school. I handed him over to carpool crying, usually he stops before he gets to school! Gotta love it.


*Logan and Carter have taken apart their remote control car and "remodeled" it. Luke wanted to take some of his stuff apart too....by banging it on the end table...gotta teach that boy how to use a screw driver. He was so proud when he got a piece to come off!

*So the boys are getting ready for church...I tell Luke, "good job getting dressed!", He says surprised, "Nothings on backwards?". Then I tell Logan he needs to go brush his teeth...as he's playing with duct tape..."No I don't, I am using tape"...he's sticking the duct tape to his teeth and pulling it away trying to clean the scum off his teeth.


*Drove to Walmart with Luke..picked out a birthday gift for Luke's friend, Luke threw a fit because he wanted a toy as well and didn't want to spend his money...I offered to pay for more than half, and he still wouldn't go for it. So I picked him up off the floor and walked out without buying anything. I hope he'll learn soon...ask nice, if mom says no...it means no...not whine longer.


*I was trying to get a kiss from luke the other day, "I need a kiss from my munchkin", then Luke says, " Then go get one from Carter!"

*boys are out playing in the new snow...Luke's trying to ride his bike in 3" of new snow.

*We went to parent teacher conference tonight...while we were waiting, I asked Luke, "what do you think your teacher is going to say about you?"...He says, "Something AMAZING!" in a really animated excited voice while we was running up and down the hall being CRAZY!

*watched "Say yes to the dress" last night with carter. Half way through he asks me, "How do you get them to like you?" So I explained dating and flowers.


*duct tape + swimming noodle + 2 crib mattresses +mini basketball = homemade basketball hoop duct taped to the boys bedroom door and a dunk contest in the basement. I take no credit for this. Boys have great imaginations.

*So all my boys are throwing around the word "upgrade". How do they know about upgrading???? Don't they know they have Chatterley roots???? Anyhow...they just bought their own tv from DI and some used xbox games as well. They are in heaven right now. They spent all their money for being good while we were in Maui. Well... not Luke, he made the boys buy him a baseball trophy for $1, he refused to bring his $.

*Not sure if Luke still believes.... Logan got the present Luke had supposedly asked Santa for and stormed out of the room crying. 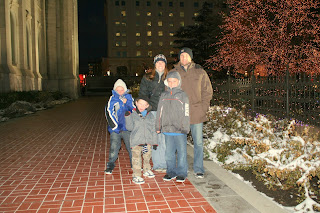 We took the boys with us to see the lights at temple square...this was where Heber took me on our first date 15 years ago...Look how much has changed in 15 years, three extra little ones. 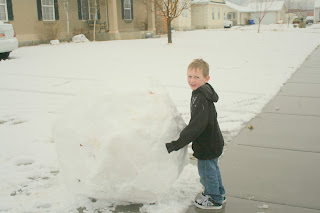 Luke decided to roll up a huge snowball with the other boys and leave it right in the middle of the driveway. 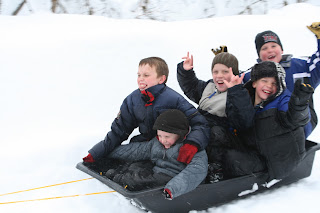 Here are my three boys plus a few friends...Heber was pulling them behind the fourwheeler down from the cabin. One day I am entitled to daughter-in-laws right? I always tell the boys they'd better pick good ones. 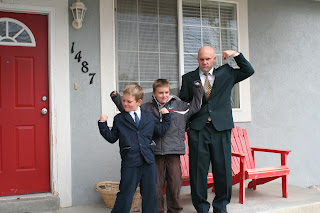 Carter and Logan showing off their muscles with Heber. Luke took off and wouldn't perform. This was Carter's baptism day.

Posted by Slipcovers by Shelley at 1:58 PM