In 2007, I decided to focus on paying off our home. That goal became a reality in June 2009! We enjoyed the debt free thing for 6 months…when we decided to purchase a cabin in Decemeber 2009. I had a hard time committing and jumping into another mortgage, but ultimately we decided we couldn't pass up a once in a life time price ($65,000). 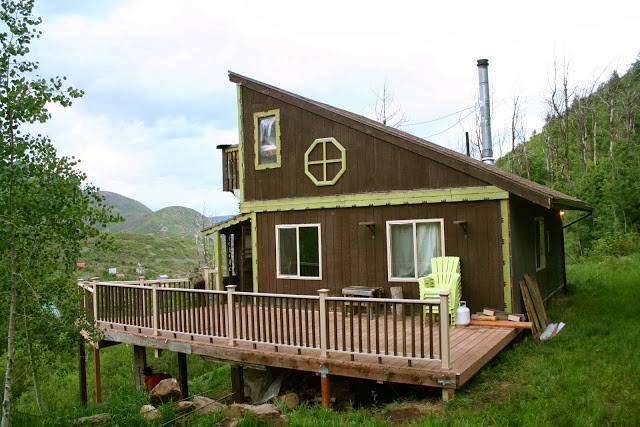 
I then spent the next 2 years and 3 months paying off the cabin, and we became debt free again in March of 2012. Which at this point my husbands car had 230,000 miles on it with the hood zip tied shut, cracked windshield, and no shocks left. 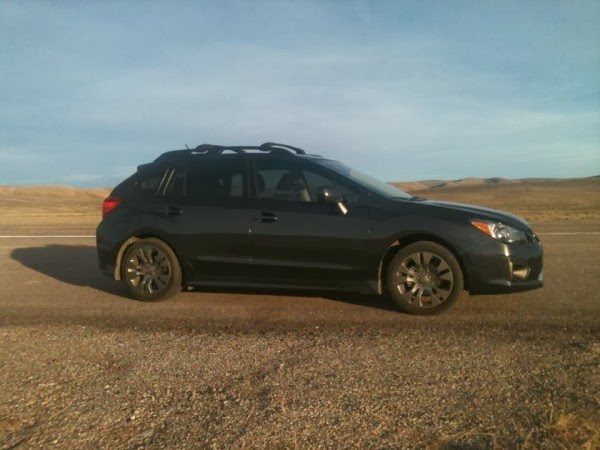 At this point we knew we were living on borrowed time, and started stocking away $ to pay cash for a new car. In 6 months we saved up $15,000 and added that to the $7,000 we had saved in a car account over the past several years and Heber flew to Jackson Hole, WY in October 2012 to purchase a 2012 subaru imprezza with 3,000 miles on it.

Yay! We made it, we paid cash for the car and were still debt free… for 2 months that is--until I got my best idea ever! I had been watching "Love it or List it", which is a design show on TV, where they remodel houses to fit the families growing needs. My wheels started turning, and I called Heber at work and told him all about it. "Sounds good, lets do it!" was his reply. I couldn't wait till my morning run to tell my running partners. 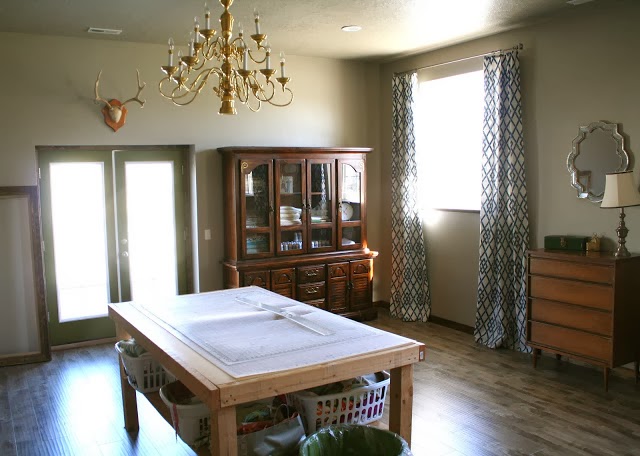 
My idea was to convert our garage to my new "work studio"--I called it my "work studio" instead of "work room", because it was going to be amazing with 10 ft ceilings, bold curtains, a chandelier hanging over my cutting table, and french doors that opened to the driveway for easy loading of furniture. With this fabulous idea, we would need to build a new garage to replace the old one. Our new garage ($15,000) went up about a month later in December 2012 and we started the garage conversion process ($10,000) in the dead of winter. We got a loan for the new garage and paid for the conversion as we went.

My goal to pay off the new garage was 6 months. My plan was to pay it off by June 2013. At this point my car was struggling, it had $180,000 miles on it and we'd replaced the transmission at 160,000 miles (we broke down driving home from Thanksgiving at 2am in Wendover) and we kept dumping $ into it trying to make it last one more year, so we could save up and pay cash for a new car. Needless to say my car died the end of May 2013--it was going to need $3,000 of transmission work! At this point we decided to call it quits and purchase a new car.

We were almost home free, I was a little bummed, we had one more payment to make to pay off the garage. I went ahead and made my final payment and the next month without skipping a beat started paying off my new car.

We bought a new Honda Pilot for $35,000 in June 2013 and got .89% financing through the dealer which worked out to about $20/ month interest. So I know it wasn't the worst thing in the world to get a loan. It had just felt like a long ride. When we first paid off the house, I thought "Oh my gosh this is it, we've done it! We are debt free, how awesome is this?!" Then we bought the cabin, Heber's car, built a new garage and converted my work studio, and then bought me a new car…in a 5 yr period! WHEW!

With that being said, my pretend goal to pay off the Pilot was 18 months…because I didn't want to be neurotic about it. I didn't want to think about it all the time running numbers in my head--by my deep down goal was 12 months. Well here I am 4 months out from my neurotic goal, and it's feasible! I can make it happen!

After I pay off the Pilot and we are debt free again, I promise we are just going to enjoy it and maybe stash some extra away for retirement. We first became debt free 5 years ago and have come full circle again. I think being debt free is like losing weight, you have to consciously make an effort to keep your needs and wants in check. Just because you make your goal weight, doesn't mean it's over…you have to maintain! My famous last words, "So I was thinking…." Heber knows to hold his breath when those words come out of my mouth--usually it means a remodel, a project, or something crazy!

I feel truly blessed that Heavenly Father has blessed me with my talents and skills. I LOVE fabric and decorating! I love what I do! I am amazed at what my business has turned into over the past 14 yrs. I always remember opportunity looks like hard work. Don't be afraid to work hard for what you want and love. I thrive on feeling productive and creating something out of nothing. I don't like wasting things and try to reuse and repurpose as much as possible…my sister calls me scrappy. I also like to be efficient, I like to make the most out of my gas, money, time, etc.

I like to share about financial stuff, because it's always so hush, hush and no one really shares openly. I wish more people would've talked to me about it when I was growing up and first married. I had no idea a 12% interest rate on a car wasn't a good deal. Once I realized $900 of our $1035 house payment went to interest, I couldn't understand how that was legal! Then I became motivated to pay it off in 10 yrs instead of 30yrs. How is 30 yrs standard?? You pay 2 1/2 times what your house is worth if you stick to the 30 yr plan! How is that an investment??? IF you make an extra payment a year on your house you cut 7 yrs off the loan! Finding out we had a credit card with 28% interest rate when we were first married, because of a few accidental late payments was INSANE! I have learned a lot over the past 16 years and have made many goals, written many lists, and scratched numbers on lots of scrap papers all over the house.

We always pay off our cards every month and have different saving accounts set up for the house, cars, vacations, kids, etc. that way when repairs come up the $ is there and we don't have to put emergencies on the credit cards. We know we are going to take trips, we know things are going to break, we know the kids want to go to college…so we plan for those things.

We try to talk openly with our kids about what things cost and what we are paying off and what our financial goals are. They love shopping at second hand stores. Just the other day I took my son to the thrift store because he needed new jeans (he grew 5" this past year), I got him 4 pairs of "cool" jeans, 2 belts, a jacket, and a fleece liner for $26! How can you beat that? He loves what he got, and was just as excited as me about the price. They know they can get a lot more for their money if they buy second hand.

Posted by Slipcovers by Shelley at 2:38 PM

good for you. thanks for sharing. not only are you extremely talented but also financially smart! :)

Thank you for sharing! Very inspiring!

You are incredible - we're debt free except for our mortgage after sticking with Dave Ramsey's plan for a few years. Now we're able to enjoy ourselves a little... kinda fun!

My hubby and I think the 30 year mortgage thing is crazy too - we did a 15 year mortgage and it's not easy, but our house will be paid off just in time for our girls to start college tuition payments!

I'm glad you posted because I've always thought your financial goals as inspiring to me. To know that it can be done. Not something that is preached but you rarely know someone that has actually done it. And that includes your house which is huge!

Great job!! Great inspiration, I love these stories. You should be proud.

You are right about talking money being taboo...not a soul I work with lives debt free like my husband & I do. It takes MORE effort & more discipline to live debt free than not. Dave Ramsey has a new book coming out this month. Smart Kids / Smart Money (or the other way around...) children are never too young to learn !
thanks for sharing your journey!

What a proud accomplishment! I'm not debt free yet, but getting there...

You are amazing. I'm impressed with how you materialized your goals in such a short time. I'm sure you made a lot of sacrifices in order to get to where you are now, but I'm really proud of you. Also, thank you for sharing your story. Reading your post made me feel like I was a part of your success as well. I'm just really moved by how you managed to balance all of that from a financial standpoint. Keep it up, Shelley! :)

Congratulations on finally being debt free, Shelley! I hope you've been enjoying your newfound freedom from your heavy financial issues. We all know how hard it is to be insanely frugal. I'm just happy that you are finally over that milestone. Hahaha! All the best to you! :)